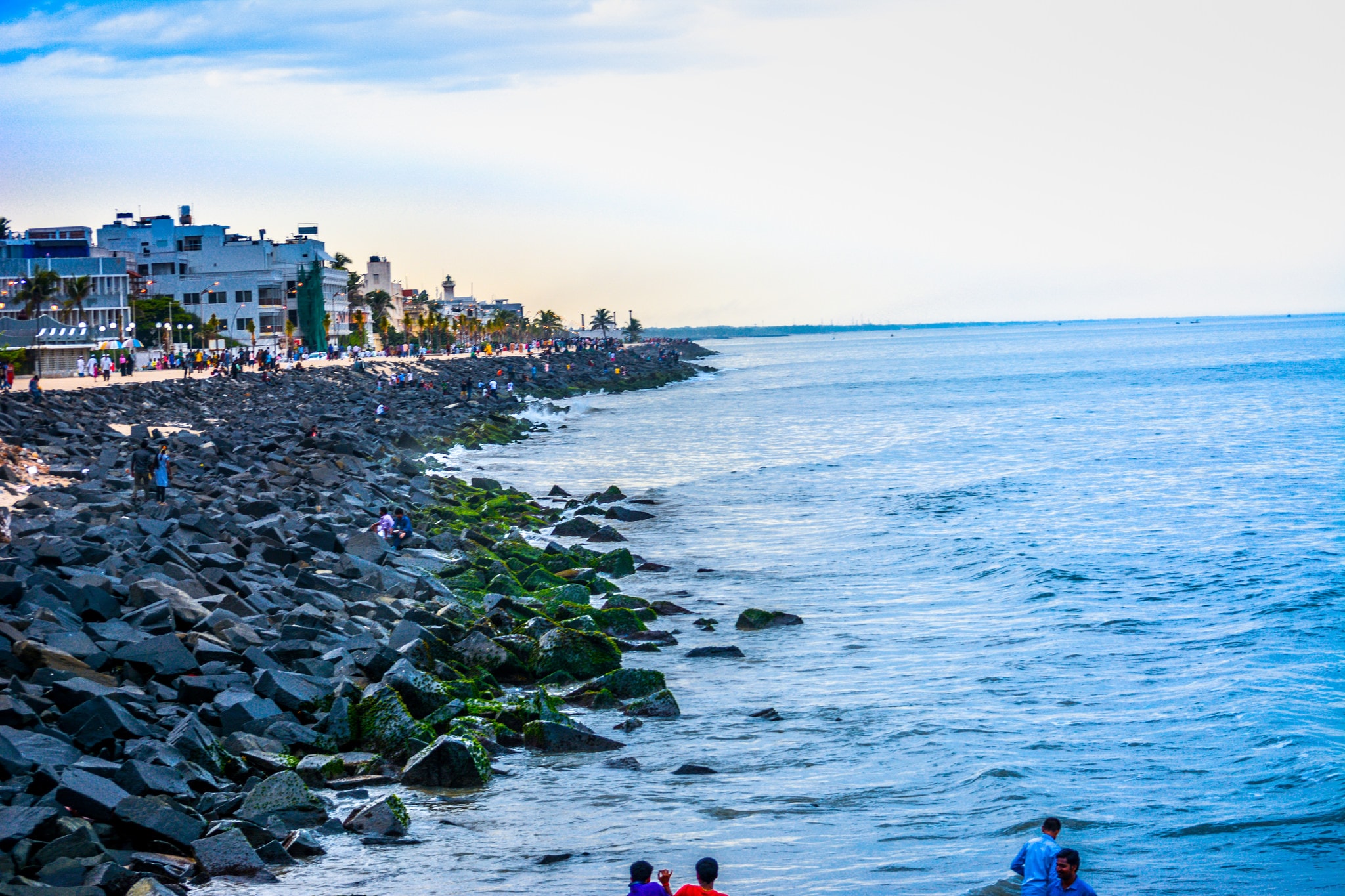 Promenade Beach is a famous stretch of beachfront that extends for 1.2 km from War Memorial to the Dupleix Park on the Goubert Ave, in the city of Puducherry, India. The beach is often crowded with groups of people playing volleyball, jogging, walking, skating, yoga and swimming, especially during the evenings. This attractive beach is usually characterised by ocean sprays, waterscape and waves of chatters.

The Promenade beach proves to be a wonderland for the tourists due to the presence of various significant landmarks nearby, namely the War Memorial, the statue of Joan of Arc, the heritage Town Hall, old lighthouse, the statue of Mahatma Gandhi, the remains of the old pier, Dupleix Statue and the old customs house.

One can spot rocks and boulders on this tranquil beach. It also hosts some of the most famous restaurants serving authentic traditional food and popular Le Cafe making it nothing less than a heaven for the seafood lovers. One can also spot a lot of hawkers near Promenade Beach, who sell local handicrafts and street food. The opposite side of the beach is occupied by the beautiful heritage building of the Tourist Information Center. Hence, all these features make the Pondicherry Beach a massive hit among the travellers looking for some escape from the mundane and monotonous city lives.

Promenade Beach has a bunch of alluring tourist attractions nearby. The list of places that one can visit nearby the beach is as follows- the War Memorial, Chief Secretariat, the Promenade, Mahatma Gandhi Statue, Dupleix Park, the remains of old pier, old customs house, old lighthouse, statue of Joan of Arc, the heritage Town Hall, Le Café, Park Monument, Goubert Market, Sri Aurobindo Ashram and the Pondicherry Museum.

The city of Pondicherry is widely known for its serenity and scenic charm. Being located on the Coromandel Coast of Bay of Bengal, this place has the most appealing weather from November until March. The clean glistening golden sands along with the azure waters serve as the much-needed escape from the chaotic city life. If you are looking for the ideal time to enjoy water sports here then the months from October until May might serve your purpose well. The evening here are quite pleasant and offers a great time to take a stroll at the virgin beaches.

Promenade or Pondicherry Beach can be easily distinguished from other beaches of Pondicherry due to the presence of a long wall of rocks along its shore at the Bay of Bengal. These huge boulders are fortified by the Government of Pondicherry about two decades ago to prevent the erosion and subsiding shoreline at Promenade. Although it is considered by many that this scheme, adopted by the Government of Pondicherry was futile and expensive as the eroding coastline can only be pacified by the restoration of sandy beaches. The hard structure of massive boulders and seawalls only seem to accelerate the devastation. All these measures are done by the Government to protect the harbour which is the likely spot for the deep-water port.
Also, this beach has a myriad of names. Some call it Rock Beach due to the presence of rocks and boulders while some call it Gandhi Beach due to the presence of the statue of Mahatma Gandhi nearby. It is known as the Pondicherry Beach due to its proximity to the city.

1. Evenings at the Promenade beach are the ideal time to satisfy the taste buds while gorging on the local and fresh seafood snacks.
2. There is no timing or fee for the entry at the beach although the timings for vehicles here is fixed from 7:30 AM to 6:00 PM.
3. Make sure to witness the exhilarating view of the sunset at the Promenade Beach.
4. Stop over at the famous Le Cafe to enjoy a steaming cup of coffee.

How To Reach Promenade Beach