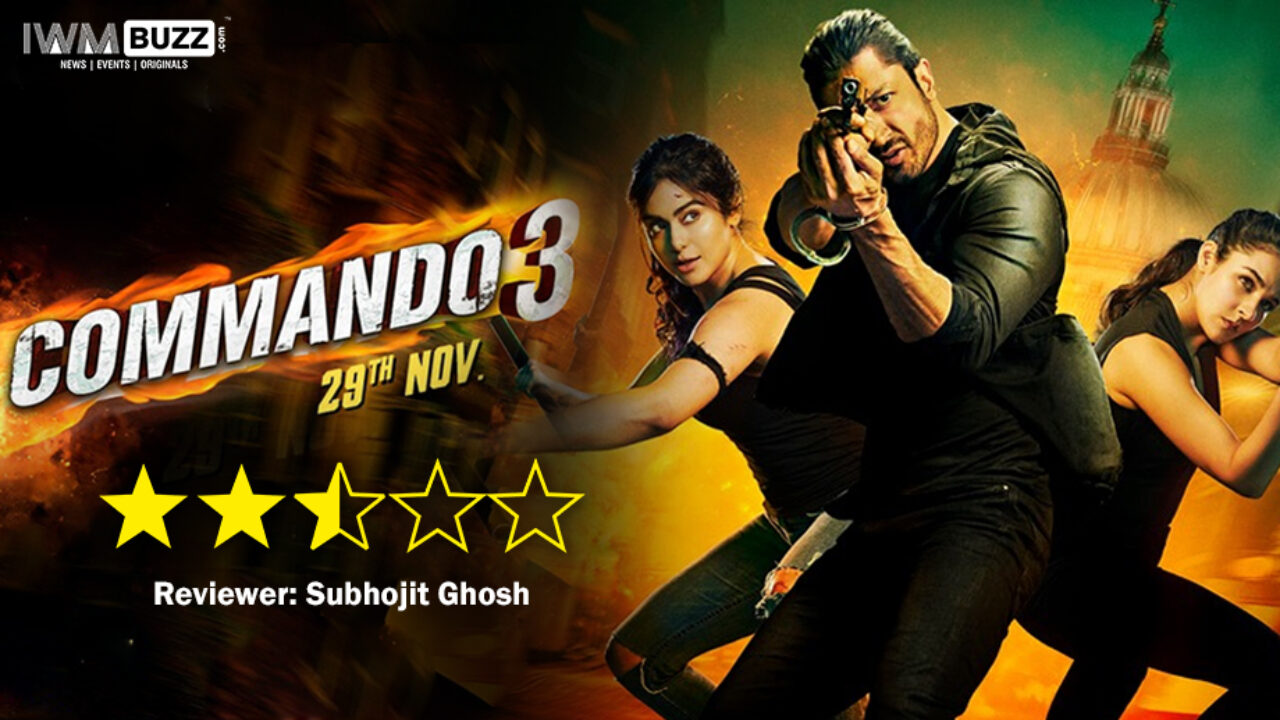 Commando 3 is a 2019 Indian Hindi-language action thriller film directed by Aditya Datt and produced by Vipul Amrutlal Shah, Reliance Entertainment.[4][5] The film is the sequel of Commando: A One Man Army (2013) and Commando 2: The Black Money Trail (2017). The third installment of Commando film series, the film features Vidyut Jammwal, Adah Sharma, and Angira Dhar in lead roles, with Gulshan Devaiah portraying the antagonist.[6][7][8][9][10] Jammwal reprises his role as the commando Karan, who goes undercover with encounter specialist Bhavana Reddy for an anti-terrorist mission in London.

Principal photography for the film began in September 2018 in Bradford and York City in England. The film was theatrically released in India on 29 November 2019.[11][12] A commercial success, it became the highest grossing film in the Commando film series.[13]

The Mumbai Police officers arrest 3 young terror suspects and try to interrogate them but get no information. Karanveer Singh Dogra “Karan” is called to help the police but one of the suspects kills himself. Upon investigating further, Karan learns the suspects received money and VHS tapes containing a terrorist’s message. Also, one of the suspects talks repeatedly about 9/11, which is decoded as an attack on India on the day of Diwali. Further learning the recordings were shot by a camera in London, Karan decides to go undercover along with Bhavana Reddy, who assisted him on his previous mission. Posing as a married couple, they arrive in London where Mallika Sood, a British Intelligence officer picks them up and takes them to their work station where another agent named Armaan Akhtar assists them. On the other hand, the British Muslim terrorist Buraq Ansari forces his son Abeer to watch him killing a man, due to which Abeer’s mother and Buraq’s ex wife Zahira wants to contact the police but is threatened by Buraq. Learning two Indian agent have arrived in London possibly to capture him, Buraq enlists the help of his agents to track them while Karan and his team go through the same process to track Buraq’s agents. While pursuing a suspect, Karan meets Zahira and Abeer, and soon gets involved in a bike chase with the suspect, resulting in the latter’s accidental death. Karan retrieves his phone and answers Buraq’s call, further telling him he would soon visit the dead suspect’s house. Karan and team arrive at the house, but outside it are stopped by Buraq’s goons. A fight breaks out, resulting in Karan getting thrown out of the house by an explosion. The video goes viral, and so does Bhavana’s tweet supporting Karan.

It is soon revealed to be a part of Karan’s plan when he releases a video of himself challenging Buraq without disclosing his identity. When Buraq’s DNA matches with that of a murder suspect, Karan and his team rush to Buraq’s restaurant but find him gone. Realizing he would have gone to pick up his son from school, Karan arrives there and challenges him before the latter disappears. Back in Mumbai, the two suspects are reformed by a Muslim saint. Buraq is unwilling to let go of his son and soon finds himself exposed when Karan holds a press conference with Abeer and Zahira. While the mother and son are being escorted safely to the airport for India, Buraq’s henchmen attack the vehicles. Bhavana is knocked out in the crash while Karan and Mallika fight off the henchmen. However, Zahira and Abeer are kidnapped and Mallika is informed about Buraq’s surrender. Karan tries to interrogate him but ends up using force due to which he is ordered to leave London within 24 hours. Buraq is freed due to making a deal with the BI; he gives them evidence for a previous attack in exchange for his freedom. On his way to a safe house, Buraq asks the officers to stop at a mosque so that he can pray. He switches places with one of his henchmen and kills Zahira. Realizing the attack would be not on Diwali but before it, Karan decides to continue alone but is joined by his team. Through Abeer’s tablet, the safe house is located and attacked by Karan and team. Following the fight that leaves all the henchmen dead, Karan injects Buraq and takes him away as he is unconscious. Bhavana and Mallika rescue Abeer, while Karan is safely picked up by his agency’s helicopter and escorted to a cargo ship heading towards India. With minimal time remaining for the attacks, Karan and the police try to find the targeted cities. Decoding “ALLAH” spoken repeatedly by Buraq, Karan finds the targeted cities and releases a video requesting the Muslims of India to understand the value of religious unity. When Muslims gear up to face the terrorists, they are joined by the police officers and terrorists are arrested. Karan kills Buraq, and hands over Abeer to the dead suspect’s father.

The success of first two Commando series made the producer Vipul Amrutlal Shah to go for third franchise. On 6 September 2018 it was announced to start Commando 3 with Vidyut Jammwal.[14] Later in September filming began in London, England.[10] The filming wrapped up in mid June 2019.[15]

The Andy Long stunt team, Amin, and Varma were nominated for the Filmfare Award for Best Action.[19]