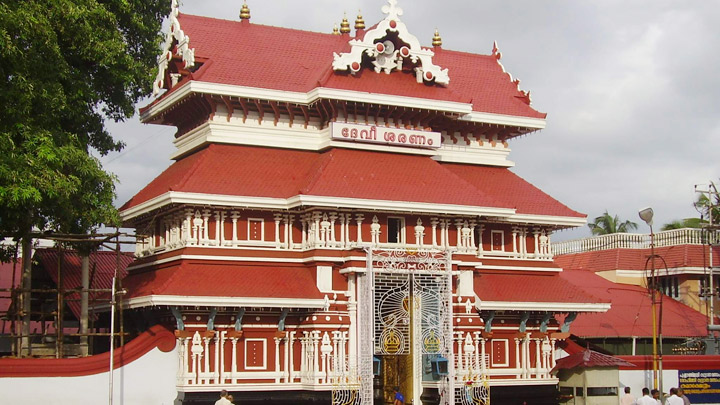 Located in the Guruvayoor town, Guruvayur Sree Krishna Temple is one of the most sacred pilgrim hubs in Kerala. It is one of the most revered temples in South India where the presiding deity Lord Vishnu is worshipped in Balkrishna Avtar. Lord idol is adorned with four hands each carrying a conch, a mace, a discus and a lotus and is also known by the name of Unnikrishnan. Garlanded with the Tulasi or Basil Garland and pearl necklace, the lord appears in full radiance blessing the devotees.

According to a legend, the temple was created by the preceptors of the Gods, Guru and God of winds, Vayu. The astonishing idol of Lord Unnikrishnan Guruvayur is made out of a rare mixture called Padala Anjanam instead of stone or metal which was more commonplace in the olden times. Simple in its construction, the spiritual charm of this place is unmatched and has devotees flocking to it from all over the country.  However, this temple is open only to the believers of Hindu faith, and there might be long queues at the entrance but completely worth as you enter the temple complex.

The Guruvayoor Temple is believed to be established in the year 1638 AD, promoted as one of the major pilgrims of Kerala by its devotees Poonthanam, Melpattur, Vilvamangalam, the Prince Manadevan (Zamorin), and Kururamma. Destroyed and restored several times, the temple managed to stand tall in its full glory till the disastrous fire broke out in the year 1970. In spite of the raging fire of 5 hours, the Vigraha and the sub shrines of Ayyappa, Devi and Ganesha remained intact including the flag staff with the help of people of all religion who helped to quench it. Till date, the temple stands tall showering its blessings on all its devotees.

Built in a typical Kerala style of architecture and Vastu Vidya, Guruvayur Temple is east faced with two Gopurams, one towards east (Kizhakkenada) and one towards west (Paringjarenada). The main entrance to the shrine is through the eastern Nada. You will witness a 33.5 m high gold plated flag post or Dwajasthambam in the outer enclosure or Chuttambalam. The gorgeous pillars of lamps or 7 m high Deepsthambam with thirteen circular receptacles are a sight to behold when lit. However, the most striking feature of the temple is the idol of the main deity, in the square Sreekovil of the temple is made of a rare mixture called Padala Anjanam instead of stone or metal.

How To Reach Guruvayoor Temple