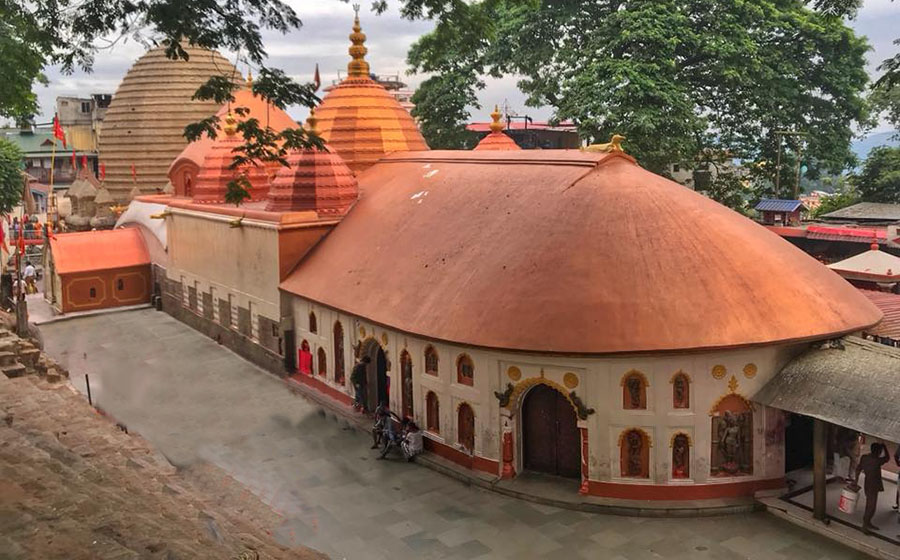 Located on the Nilanchal Hill in the western part of Guwahati in Assam,  Kamakhya Temple is one of the most revered shrines of Goddess Shakti in India. According to the Hindu scriptures, there are four important Shakti Peethas (Temples with highest powers of divinity) in the country and Kamakhya Temple is one of them. Kamakhya Temple celebrates the power of the woman to give birth and is regarded as extremely auspicious among the followers of the Tantrik sect of Hinduism. It was built and reconstructed multiple times between the 8th and 17th Centuries and is a spectacle in itself.

The main entrance of the Kamakhya temple is beautifully designed with simple yet elegant carvings that are decorated with colourful flowers. The temple has a massive dome which overlooks the quaint Nilanchal Hills in the background. It is especially decked up during the Ambubachi Festival and fare that is held for 3-4 Days in the month of June.

The Ambubachi festival at Kamakhya temple

The Ambubachi Festival is a celebration of the Goddess’ fertility. The celebration hinges on the belief that the Mother Goddess, Kamakhya, Shiva’s young bride, is menstruating at this time. The Temple remains closed and the Goddess is bathed after those three days after which the normal activities of the temple are resumed. It is believed that at the time of monsoon when this festival is observed, the Mother Earth is at her fertile best due to the rain nurturing her womb (the soil).

History of the Kamakhya Temple

The Kamakhya Temple is one of the oldest temples in the country and hence has a long and illustrious history associated with itself. It is believed that this temple was built during the Mleccha dynasty in 8th – 9th century. The Kamarupa Kings from Indra Pala to Dharma Pala were ardent followers of the Tantrik cult and at that time this temple became an important destination for Tantrikism. The Kalika Purana was composed in the 10th century and it enhanced the importance of the temple as a seat for Tantrik sacrifices and sorcery. Mystic Buddhism or Vajrayana emerged here around that time and a number of Buddhist professors in Tibet were known to belong to Kamakhya. The Kamakhya temple was destroyed during Hussein Sha’s invasion of the Kamata kingdom. The ruins remained undiscovered until the 1500s when the founder of the Koch Dynasty Vishwasingha revived the temple as a site of worship. The Kamakhya temple was reconstructed in 1565 during the reign of his son and ever since then, the shrine has been an important religious centre for Hindus across the world.

Structure of the Kamakhya Temple

The current structure of the Kamakhya temple is said to be of the Nilachal type, which is another word for architectures with a hemispherical dome and a cruciform shaped base. The temple has four chambers aligned from east to west described as follows:-
1. Garbhagriha: The Garbhgriha or the main sanctum rests on a base which has a number of sunken panels embellished with the sculptures of Ganesha and other Hindu deities. The lower parts of the Garbhagriha are made of stone while the zenith is in the shape of an octagon and is made out of bricks. The Garbhariha is situated below ground level and can be reached by a series of rock cut steps. A rock fissure in the shape of a vulva-shaped depression which is present here and worshipped as the goddess Kamakhya. The depression is filled with water from an underground spring and this is the general pattern of all the Garbhagrihas in this temple.
2. Calanta: Towards the west of the Kamakhya temple lies the Calanta, which is a square shaped chamber of the atchala type. Small moveable idols of Gods and Goddesses are found here, while the walls of this chamber have a number of images and inscriptions carved onto its surface.
3. Pancharatna: To the west of the Calanta is the Panchratna which is a large rectangular construction having a flat roof and five small spires protruding from its roof.
4. Natamandir: Towards the west of the Pancharatna is the last structure of Natamandir which has an apsidal end and ridged roof of the Ranghar type Ahom style. The walls of the Natamandir has inscriptions from Rajewas Singha and Gaurinath Singha inscribed upon them.

Mystery of the Kamakhya Temple

While the Kamakhya Temple in itself is a highly revered site for all the followers of Hinduism; legend has it that during the month of Ashadh i.e. June according to the Gregorian Calendar, the Bramhaputra River that flows beside the temple turns red. It is believed that this is a divine phenomenon and that it happens because the Goddess menstruates during this time. While some people claim it is due to the high iron and Cinnabar deposits in the water, others continue to believe that it is a divine miracle! Thus, every year during the Ambubachi Mela, the river and the temple attracts thousands of devotees.